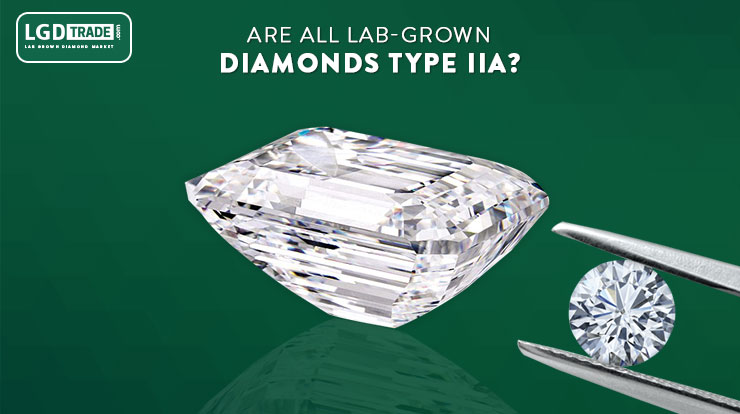 Lab-Grown Diamonds(LGD) Type IIa are the smart choice for the smart generation. Out of all the reasons people of this day and age prefer Lab Made Diamonds, one is – purity.

What is a Type IIa diamond?

Type IIa diamonds are the purest form of diamonds. They contain very minimal or absolutely zero impurities in the form of nitrogen or boron atoms in their carbon structures. They are rarely found and represent only 1 to 2% of all mined diamonds. These rare mined pieces are exceptionally colorless white stones and they also come in brown, purple, blue, or pink hue. Because of their rarity they command 5 to 15% premium when found.

Which are some of the famous Type IIa diamonds?

The Archduke Joseph diamond is an antique cushion-shaped, stunningly colorless Type IIa diamond. The diamond originally weighed at 78.54 carats. It was bought by Molina jewelers in Arizona in the 1990s and was re-cut to 76.45 carats improving the clarity and symmetry of the diamond. The diamond was found in India’s Golconda mines. . Thus it’s D-color certification. It is cut in a rectangular cushion shape, a style of cutting that is not completely unfitting with its Indian origin. It was claimed for the first time by Austria’s Archduke Joseph August as he deposited it in a Hungarian bank vault in 1933.

Are all lab-made diamonds type IIa?

Yes. All lab-grown diamonds type iia are made from scratch in controlled lab environment. Unlike synthetic diamonds they are made from carbon atoms, like real diamonds. Mined diamonds are formed when dead animals are fossilized under the earth for millions of years; this evolution allows many impurities in them. This is not the case in lab-created diamonds; you get the purest form of diamond, with the exact chemical composition, in more varieties of color and shape.

Lab Grown Diamond is the most trusted and biggest lab made diamond marketplace. To know more visit www.lgdtrade.com.

Read Next Blog: What’s The Difference Between IGI and GCAL Certified Diamonds?