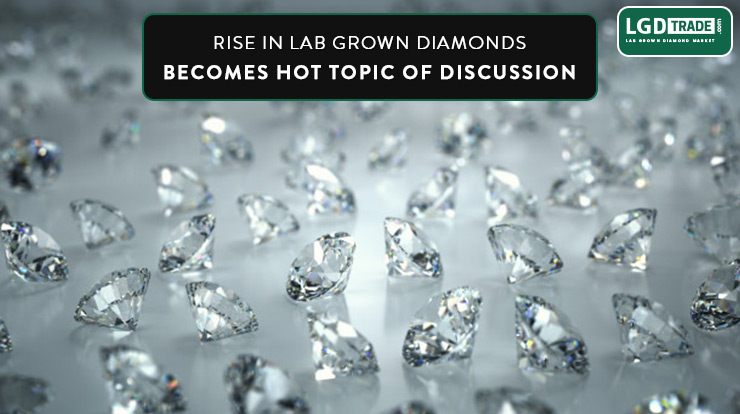 In the $14 billion diamond market across the world, A new group of diamonds happens to be the more perfect diamonds than almost all others. These completely colourless diamonds are among just 2 percent of the diamonds in the world according to the Gemological Institute of America. These diamonds are entirely free from any impurities and brag a measure of clarity that borders on flawless, and the level of brilliance at play here is unmatched by virtually all other sparklers.

These laboratory-created diamonds are perfect because they were created to be that way. A growing number of companies are offering up these “visually identical” alternatives that come from labs in Silicon Valley, instead of diamonds that have been extracted from the mountainous expanse of Republic of Sakha in Russia or the De Beers-operated mines in Botswana.

Traditional jewellers such as De Beers, which powered the majority of the world’s diamond supply until the late 90s, have been generally unwilling to be too praiseworthy of this new practice till date for obvious reasons. However, the lab-grown diamond industry is assumed to show quite a bit of growth in the next few years. The market for lab-grown diamonds could account for 15 per cent of the gem-quality diamond market by 2020, up from less than 1 per cent in 2016,  according to Morgan Stanley. Predictably, millennials are supposed to drive that charge, in large part enticed by the market affordability of and the lack of potential human rights tied to the “cultured’ stones. With a possibility for significant growth in the popularity of synthetic diamonds, The Federal Commission has been paying attention. The government agency which promotes consumer protection -issued updated Guides for the Jewelry, Precious Metals, and Pewter Industries in July 2018. These guides aim to stop the use of deceptive representations by jewelry companies about their offerings, including lab Grown Diamonds.

In particular, the FTC “warns marketers against using any gemstone name to describe any man-made product unless an equally noticeable ‘laboratory-grown,’ ‘laboratory-created,’ ‘synthetic,’ ‘imitation,’ or ‘simulated’ disclosure immediately precedes the name.” Going further, the FTC also take cares that marketers should use this terminology “only for products with crucially the same optical, physical and chemical priorities as the named stone.”

A few days back, the FTC confirmed that it has sent letters to eight unnamed jewelry marketers – “stating them that few of their online advertisements of sparklers made with simulated or laboratory-grown diamonds may mislead consumers, in violation of the FTC Act.” The FTC’s letters specifically took issues with ” examples where the advertisement might signify that a lab-grown diamond is a mined diamond or a simulated diamond is a lab-grown diamond or mined diamond, or where needed revelation about the source of the diamonds is not accurate to the individual product descriptions.

For the likes of De Beers & Co., what the rise of these alternative diamonds means, as everyone is not seemed to be convinced this will be a deal breaker any time soon. Robert H. Frank, a professor of management at economics at Cornell’s Johnson Graduate School of Management, wrote for the New York Times, “Not even perfect replicas, however, will extinguish strong preferences for mined diamonds.” In short terms, Mr Frank feels that nothing will change, including prices.

But beyond that, the lack of uniqueness in large, flawlessly carved and colored diamonds might have an impact. “longer term,” he says, the price premiums accompanied with real diamonds “may prove delicate.” Why? Because “wearing large diamonds, will no longer to signal notable wealth or charm admiring glances,” he says. A collapse in prices will convert longstanding social customs. An engagement diamond, for example, will lose its ability as a token of commitment once impeccable two-carat stones can be had for only $25.”

Of course “technology won’t abolish the need for worthy gifts and tokens of commitment, and such things will, however, need to be both naturally pleasing and authentically scary,” but ultimately what it will change is “where those qualities reside.”